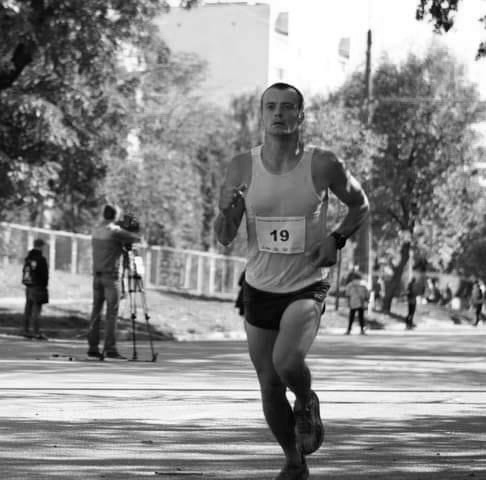 Serhii set a record in 2019. He ran the marathon distance in 4 hours and 36 minutes in full military gear.

His heroism during the war became known from his compatriots. They told the boy single-handedly had destroyed eight units of enemy equipment and, in the end, he had sacrificed his life for the sake of the Motherland.

The enemy did not enter the territory of the Boromlia community with several hundred units of equipment. Although a territorial defense unit was organized in the village at the beginning of the war, Serhii decided to act as a lone partisan, because, as he believed, it would be much more useful. As a marathon runner, it was not difficult for him to run a dozen or more kilometers at night, scout the situation around Boromli and neighboring villages, return home in the morning and report on the location of the enemy. When, after such “runs” in Boromlia, they began to learn that either a tank or an armored personnel carrier was burning at night near Zhyhailivka, then near Novhorod, Serhii’s relatives and friends began to guess that he had begun to act himself.

During the day, Serhii made «Molotov cocktails» – homemade incendiary weapons, and at night he put several bottles in his backpack and ran to scout for enemy equipment. «Cocktails» turned out to be an effective means of destroying the occupier’s equipment. In two weeks, there were  burned eight units. The Russians began to «hunt»  for the lone avenger, at all posts at night they were already vigilantly watching for any movements with thermal imaging cameras.

Most likely, the Russian occupiers tracked down the boy with night vision devices.

He was caught near the television tower, which is a few kilometers from Boromlia. At first Serhii Pronevych was tortured, then he was shot. His body was found there after the liberation of Boromlia – a week after his disappearance.